What happens to solar panels in a hurricane? Believe it or not, not much. Two real-world examples illustrate this fact. Hurricane Sandy pelted the New York and New Jersey metro areas with unprecedented amounts of wind and rain in 2012. In New Jersey, a state with high per-capita use of residential solar panels, the vast majority of the state’s solar panels were unaffected.

Another example was Hurricane Maria which hit Puerto Rico in 2017. The city of San Juan is the capital of Puerto Rico and is one of its most populous cities. It was also one of the hardest hit by the hurricane. A crucial VA hospital in Puerto Rico’s capital that used a 645-kW solar system never stopped operating below 100% capacity. When the people needed it the most, solar power prevailed. 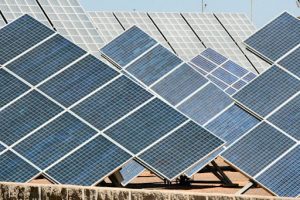 How Do Solar Panels withstand Hurricanes?

Because solar panels are located outside, they must be durable. They must be able to withstand wind, rain, hail, and of course, continuous sunlight. Most solar panel manufacturers wind test their solar panels at extremely high speeds.

According to Energy Sage, “most solar panels are certified to withstand winds of up to 2,400 pascals, equivalent to approximately 140 mile-per-hour (MPH) winds.” How exactly do solar panels tolerate winds at those speeds? It’s in the design.

What Happens To Solar Panels in a Hurricane? – Solar Panel Wind Design

Solar panels are shaped to be aerodynamic, This reduces wind shear against the panels. They are also often fastened into place by heavy bolts that are screwed directly into the beams of your roof. Depending on your state, there may be specific wind resistance requirements.

In Texas, for example, solar panels must be able to withstand 110 MPH winds. A strongly constructed rack and well-sealed mount should prevent your solar panels from going anywhere, even in 110+ MPH winds.

What Happens To Solar Panels in a Hurricane? – Impact Tolerance

Hurricanes can mean hailstones and debris hitting your solar panels as well. Luckily, they are tested to ensure they can endure hail stones. In fact, the hail testing process involves shooting ping pong ball-sized balls of ice at the solar panels at 70 miles per hour. A large, 3,000-panel solar array in Colorado was hit by an ice storm in 2017. Only one panel was damaged and that was because several hailstones hit it repeatedly in the same spot.

So, what happens to solar panels in a hurricane? Thanksfully not much, as they are built to withstand the most challenging of conditions. Now that you know some information about solar panels and hurricanes, contact us at Sunshine Renewable Solutions. We’re experienced Houston solar installers, and we accept nothing but reference-level project installations.