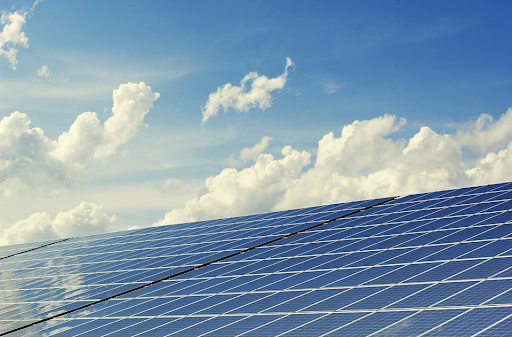 If you’re interested in solar power, Tesla, or both, you may have heard about Tesla’s solar roof, a solar energy product that’s similar to traditional solar panels in function but very different in aesthetic, installation, and potential performance. But how does the technology actually stack up compared to traditional solar panels? And, is it an option you should consider for your own home?

Below, we’ll look at the Tesla solar roof vs. solar panels to answer some of the most common questions we hear from clients and Tesla enthusiasts alike!

While Tesla’s solar roof may offer a better price-per-watt value, the up-front costs will likely be too high for the average homeowner to justify when compared to traditional solar panels.

Cnet notes that while purchasing and installing solar panels can cost anywhere from $15,000-$25,000, the total up-front costs of Tesla’s solar roof can be between $70,000-$100,000. That’s a huge swing in product/installation costs, and at this point, it’s a new technology, which means it may not be an affordable option for many people.

There’s no denying the innovation of Tesla; just as with many of their products, the solar roof is nearly unmatched when it comes to overall effectiveness and ingenuity. This product does generate more solar power at a lower cost per watt than traditional solar panels, which could make up for some of the up-front costs in the long run. However, you’ll be saving a lot of money up-front and still getting stellar results with traditional solar panels.

One of the great things about solar panels is that they can move wherever you do! A product you can bring with you for life. However, the Tesla solar roof cannot do that because it’s specifically designed to fit your house’s roof. If you choose to move, that large investment you made in the solar roof won’t be able to be transferred to your new home. This lack of mobility is a major factor to consider for those who may want to relocate in the future.

Looking for a Tesla Powerwall in Texas? Look No Further! Click the Link to Learn More.

So, what’s the final verdict on the Tesla solar roof vs. solar panels? We think traditional solar panels will be more viable for most people for the time being. Listen, we love Tesla and are proud certified distributors, but as with any new technology, it takes time for widespread adoption and scaling to bring costs down. While Tesla’s solar roof does offer many benefits like longevity, lifetime warranty, lower price-per-watt than traditional solar panels, and fantastic power generation, it is still out of reach for most homeowners who either believe they will move sometime in the future or cannot afford the higher upfront costs.

Consumer-friendly solar panels have been on the market for less than 40 years, and within that time, there’s been tons of innovation made, and costs have come down. We believe it will take some time before the solar roof is a viable option for many homeowners, just as solar panels were in the mid-1980s. If you’re interested in solar power but can’t afford Tesla’s steep upfront costs, we suggest going with the proven power of solar panels.

Texas solar is a growing market and highly-valuable commodity for homeowners. As experienced Houston solar installers, we aim to help all of our clients make the most of their solar energy systems.

We’re proud to be one of the premier solar companies in Texas, and you can always count on us to guide you towards the best solar solution for your needs.

Get a free quote today!